The Peoria Lakes, which refer to the widened portion of the Illinois River in the Peoria area, are natural riverine lakes that were formed by tributary deltas that narrow the valley and pinch the river to form two broad basins. The Lakes are Greater Peoria’s most precious natural resource and are a significant landmark that have defined the region for thousands of years. However, over time, water quality has declined, habitat has been lost and degraded, and sedimentation has steadily filled in the Lakes due to urbanization, industrialization, and the conversion of prairie lands to agriculture. Today, the majority of the Peoria Lakes is less than three feet deep. 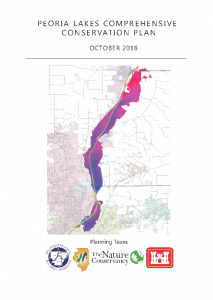 Our quarterly newsletter and social media pages will keep you up to date with regional news and goings-on. We never spam. Ever.
X
Skip to content